Leapfrogging into the Future

Back then, all overseas business from all the corporate offices located in Calcutta was by way of the telex 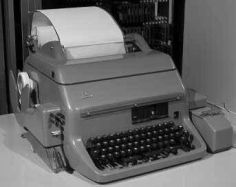 machine.  For us on the estate never having been exposed to one, the telex machine was a complete enigma, a complex piece of hardware with spools of some sort of tape which, when any communication was ongoing, would flow out of the machine punched with randomly sited holes.  I’m just guessing that the placement of those holes punched into the tape were the precursor to Braille, which only the telex operator (a tech wizard held in awe by all and amongst the most vital cog in the wheel in the scheme of things) could decipher.

In Assam we were far removed from all that technology with the only means of communication at our disposal, if these were not hand-written notes, used to be very badly formatted letters churned out from exhausted looking typewriters 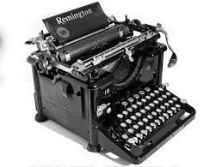 equipped with huge unwieldy carriages which were wont to jump a couple of spaces off their own free will while the typist would be still in the midst of hammering away at the worn out keys.  The written word then being despatched by way of the good old tried and trusted pigeon mail with no certainty of being received at the other end so that important letters were always sent and received by way of registered post.  Looking back at it I’d say that it was actually a rather wonderful system which gave one the option to wriggle out of any uncomfortable situation which didn’t suit ones fancy by simply dismissing any awkward follow-up with a terse ‘didn’t receive any letter to that affect’!

While a number of estates weren’t connected as well and while there were long periods when this instrument was about as useful as a door stopper, on Limbuguri we did have a telephone 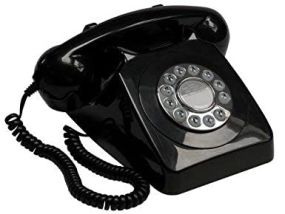 which actually functioned every once in a while.  The regular and ongoing host of all sorts of minor irritating faults and issues with the system which one had to contend with would somehow get addressed after regular and concerted follow-up and chasing up with the moribund telephone department.  While such follow-up was reserved for what we termed as being ‘minor faults’, to address and explain the VERY long periods of ‘out of service’ complaints made to them, in response to the authorities having received a registered letter to lodge the serious grievance, the Telephone department would go the extra mile by despatching a linesman in flesh and blood to the estate to inform us that they were helpless since someone had snipped off the overhead cable from the ends of a couple of poles (likely sold off as scrap to the local scarp dealer) and that service would be restored as and when the cable requisitioned by them was received from their distant stock point.  Proactive folk!

During one of the periods when our communication lines were functional, on a Tuesday morning I received a call from Mani the MDs PA in the H.O. in Dibrugarh.  Mani a delightful and gentle podgy Mallayali gentleman who by nature was an excitable and rather jumpy character who always gave one the impression that he needed to rush off for a pee.  On this particular morning with his voice trembling with excitement and in between him taking deep breaths, he managed to convey to me that Mrigin (Mrigendra Jalan the MD) had requested that it being rather urgent, could I please make my way across to the HO that morning.  Dibrugarh being a good three hours away over not quite the best of roads and since in any case I was required to be in the HO on the next day for our regular Wednesday weekly Managers meeting, with another trip on Tuesday being not a very appealing prospect, could whatever it was that I was required for not be sorted out the next day when I would be there?  My ‘suggestion’ was immediately shot down with ‘Mrigin told me to tell you that it’s a very important matter which can’t be delayed’.  With my protests having been steamrolled, there was nothing to it but to curse (which I always was and continue to be a past master at) mutter under my breath, hop into my Gypsy and head out.

Arriving at the HO and walking into Mani’s antechamber, I found him besides himself with excitement with a look on his face which seemed to suggest that he was, at any moment, likely to pee in his pants.  The moment I stepped into his office the gentleman almost jumped out of his chair and without giving me a chance to even say hello scampered across from his side of the table to literally pull me into Mrigin’s room with an excitable “MDs been waiting for you”.  Walking into the bosses office, wondering at the reason for all the excitement, I was met with a rather perfunctory “Oh good you’ve arrived” followed by Mrigin with a somewhat mischievous smile on his face turning to Mani with “Take Mr Khanna and show him!”  By now, caught up in the suspense, I did so want to ask “show me WHAT?” but was not given time to get so much as a word in edgeways because Mani was already halfway out in the corridor, breathing heavily with excitement while holding the door open for me to follow him.

Walking fast to keep pace with Mani who was literally charging ahead of me we headed towards Mrigin’s bungalow located just behind the office complex.  I was quickly led through a couple of rooms into a chamber which, somewhat bare and bereft of any other furniture cluttering it, 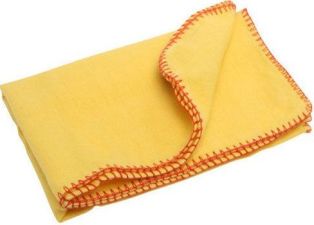 was populated with a single table placed in isolated splendour at the far end.  The table had SOMETHING on it which was covered with a yellow dusting cloth.  Folk of my generation would remember that ANYTHING of any value in any household was always protected by this obtrusive fuzzy yellow fabric with the edges neatly sewed in with red thread.  Other than THE object under the protective covering, the only other thing visible were a couple of wires, leading out from under the yellow hijab.

That I was intrigued would be an understatement.

While I was still scratching my head Mani walked across across the room to the table, clutched the yellow cloth and other than shouting “abracadabra” (anyone out there remember Gogia Pasha and his “gilli-gilli”?)

enjoyed his magicians moment by whipping off the dusting cloth with one deft motion.  My “what is this?” was responded to with what was definitely awe in Mani’s voice, “it’s a F-A-X machine!” which was followed by him explaining to me, as one would do to an idiot and disbelieving child, what this magical contraption was capable of doing.

To prove what he had explained to me as being the magical function of this contraption, Mani scribbled something on a paper, placed it in the transmission slot on the machine and dialled the Calcutta corporate office number.  The magical instrument went through the motion of sucking in the paper while making all sorts of interesting electronic sounds followed by a loud click after which the contrivance became silent and went back to sleep.  Mani waited all of a minute and then with a wall to wall grin and with his eyes literally dancing in glee, picked up the receiver to call the Calcutta office. 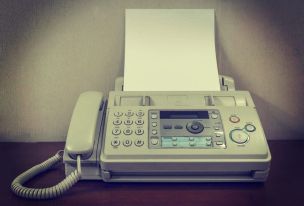 His question of “Have you received it?” having likely been responded to in the affirmative from the other end, he handed over the receiver to me.  The reply to my query as to what was it that had been received was a rather cryptic “a paper!” after which the gentleman at the other end read out what was written on the paper he had received.  And there was I, reading exactly the same words on the sheet of paper which Mani had fed into the machine and which I now had in my hand!  You could have knocked me down with a feather.

Having witnessed magic and having come to the conclusion that I had now crossed the Rubicon since it was unlikely that we’d ever, as long as we lived, get to see anything more futuristic, the only words I could blurt out to Mani were “what amazing technology!”

Does anyone wish to question my statement when I say that we planters lived simple lives?