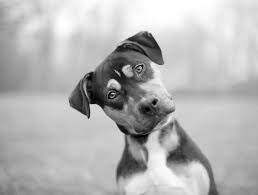 This was in 1987 while I was the manager of Limbuguri Estate in Upper Assam.

Lady, our docile and beautiful Labrador, while she was on heat, had obviously managed to squirm herself

out from under the fencing of the bungalow compound to meet up with one of the loads of her suitors from the labour lines who would always be found hanging around the bungalow waiting for just such an opportunity.  Bottom line being that Lady managed to get knocked up.

Two months later with Kitty and the kids away on holiday to Simla, preparations had been made in the kids room all ready for the day when I was to become a grandfather.  The day arrived with our bearer (Japan) and I watching in wonder while Lady worked her way around delivering eight beautiful Lab pups, five of them a lovely golden colour similar to her own and three black pups.  While we assumed that was it, Lady exerted one more time.  The outcome of that final push was a rather strange looking curled up ball of fur.  Lady having licked the pups clean, looking carefully at # 9, my immediate reaction was that this fellow was a runt which we would probably have to put down.

While I was still mulling over the prospect of having to go through with this odious task, our friend was already on the move crawling up to get to his mums teats.  Watching his energy and antics it became apparent that barring his appearance which was VERY different from that of his siblings, the fellow seemed to be perfectly healthy.

A couple of days later after the pups had opened their eyes fully and had started squirming around, having had a good look at ‘Mr Last to Arrive’ I came to a decision that this pup was the one from the litter which the children would love and the one we’d keep.

Over the next couple of weeks as he matured, one had to conclude that this little fellow had to be just about the strangest looking dog one would ever see.  His coat was reddish brown.

Four legs which ended in very large paws wearing white socks which were dappled with black spots.  A tail which started out from his rear thinner than a Labradors tail before ending up as a white speckled tuft much like a lion’s tail.  One ear which stood out erect while the other was lazily bent over double.  A muzzle which, like his tail and paws, ended in black speckled white.  The icing on the cake of this strange looking collage were a pair of the strangest, yet the most beautiful, golden hued eyes which peered at you with a permanently quizzical gaze.  There simply was no way that I could have named him anything other than CARTOON.

To the workers, unable to get their tongues around his name, he became Kartoo.

Much like Jack’s beanstalk, Cartoon grew by the day.  He ended up a very tall and rather large handsome specimen, though living up to his name.  He loved to wander and would disappear from the bungalow compound for hours on end, likely fathering cartoons all over Limbuguri, but would always magically appear in the

dining room well in time for our dinner.  He loved to ride in my Gypsy and would accompany me on my garden rounds sitting proud and erect on the front seat.  Driving through any of the labour lines, should a chicken run across the road or should he spot one anywhere, he’d be off the seat in a flash to dart off with the bird in his mouth, to be seen in the bungalow hours later.

Needless to say that very regularly I’d have some worker coming to me in the office carrying a woebegone expression and a sob story which had me ending up having to pay for the victims of Cartoon’s hunting expeditions.  Not just for the bird but, should the prey have been a hen, also for the many eggs she would hypothetically have laid.  In addition to his hunting forays with me having driven him to his prey, fairly regularly I’d have workers complaining about Kartoo having visited one of the six labour lines on the estate and having made off with a chicken.  Always a chicken which was supposedly the ultimate egg-layer in the lines.

Went on for ages with the hole in my pocket becoming ever deeper, but try as I might I was unable to control Cartoons hunting missions.  By the end of it, in the Limbuguri labour lines Cartoon became something of a legend and was infamously Christened by the workers as ‘burra sahib ka murghi chor’ (the Managers chicken thief).

The story unravelled on the day when, leaving the Gypsy in the bungalow I decided to instead walk across to my office.  Pushing open the gate of the bungalow, very close to which were the houses of the bungalow staff, from the corner of my eye I spotted Cartoon sitting erect and very alert in front of Gokulchand,

our rather lovable and regularly drunk house boy.  What surprised me was that Cartoon was looking most attentively down at the gentleman’s hands which were busy plucking the feathers off a chicken.  It being almost the fag end of a month by which time most workers would normally have exhausted their salaries and would be scrounging, here was Gokulchand who was well known to drink away his wages within days of getting the money in his hands, that tableau being played out in front of me stopped me dead in my tracks.  The penny having dropped, I called Gokulchand and in my most theatrical stern voice asked him how on earth was it that this being the end of the month, did he have money for buying a chicken?  After much humming and hawing and shuffling of feet and with me in turn cajoling and then threatening him with a fate worse than death he blurted out the truth.  Piecing together the disjointed words tumbling out of his terrified mouth I finally understood the reason for the drain on my resources.

That every now and then Kartoo would head out of the bungalow on his shikar to return with a chicken which he would gently drop at Gokulchand’s feet.  The bird, paid for by yours truly, would be cooked by Gokulchand and shared equally between the two.

Thoroughly impressed with the system, I had to suppress my immediate urge which was to congratulate the duo for having set up this mutually beneficial partnership.  Instead all I could do was to glare at the twosome.  Gokulchand, busy staring at some spot between his feet and refusing to look me in the eye and Cartoon, goggle eyed and with a what I assumed to be a grin on his mouth with a quizzical expression which seemed to suggest “aren’t I clever?”

Never being able to catch them again at their game, it was obvious that the modus operandi had been fine tuned since there was no change in my regular payouts which obviously ensured Gokulchand was getting his regular supply of protein at my expense.

When we finally left Assam and Limbuguri in 1990, while Lady accompanied us to be adopted by Kitty’s parents, there being no way that we could take Cartoon with us, we very reluctantly had to leave him behind to be immediately and happily embraced by his hunting buddy.  Regardless of Gokulchand already being of a ripe age at that time, I am fairly certain that he and Kartoo must have carried on with their expeditions long after we had left Assam and that the pair of them would still be doing their thing in their happy hunting ground, wherever that may be.