The Periya Dorai’s angle to Angling 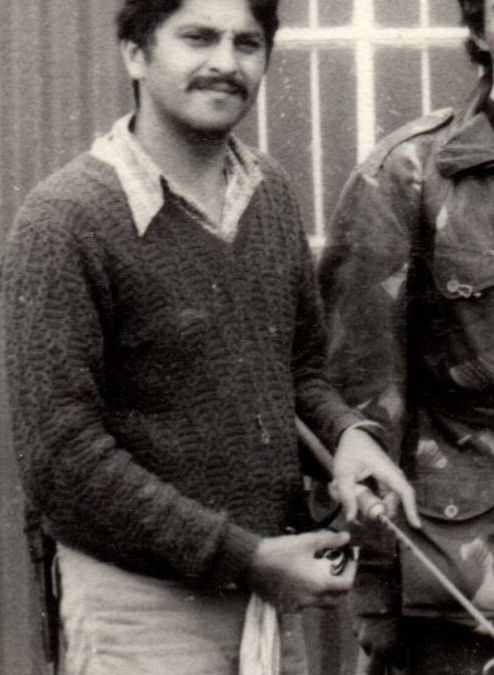 whom I looked up towards as a father figure, I was transferred to one of the other Malayalam Plantations properties in the High Ranges – Surianalle Estate.

Despite the fact that Surinalle was directly on the opposite side of the valley from Panniar with a clear line of sight and probably not more than two kilometres away as the crow flies, looking in that direction from Panniar, at most times one never really ever got to see Surianalle.  The reason being that Surianalle Estate was almost always totally invisible.  Which is exactly what the very name translated into – Surian (the sun) Illay (not there!).  An apt name for what the property literally was – totally bereft of any sunshine.  Every single morning one went down to the muster in thick, constantly swirling mist which hung over us heavy as a blanket and stayed enveloping us all the way through to well past noon.  Around which time, almost as if someone had waved a magic wand, the mist would dissipate to allow the sun to stream in (that too only when the sky was clear of clouds) opening up a temporary window which allowed all of us to get our daily fix of vitamin-D.  That window would remain open till about three in the afternoon, after which we reverted to status quo and back to being Surrian-alle!

I digress, so let me wander back to my actual ramble.

The PD in Surianalle was a short (all of 5′ 4″) stocky and tough as nails Scotsman from Aberdeen in the Highlands.  Clyde Lawrence despite all his bluff and bluster (and he had oodles of that to toss around) was at heart a bit of a softy.   All in all a rather delightful “teddy bear package”.  Following my transfer from Panniar, as he was wont to do so as to maintain his taskmaster reputation in the company, after a couple of months of making me run around like a trained monkey and having established that maybe I was an ‘alright type’, one day while walking with me through one of the tea fields, Clyde casually threw a question at me as to whether I had any interest in angling.  Me?  Angling!??!  Having arrived in South India straight out of the dry hills of Simla up in the foothills of the Himalayas, followed by college and university in Chandigarh, was like him wanting to know whether I had ever visited the moon.  Ask any self respecting Punjabi and you’ll be told that the only angling which is practiced with a lot of gusto in that part of the world and especially in the university area is ‘marroing angle‘.  Used with gay abandon on any hapless soul dressed in a skirt or a salwar-kameez.  One of those lovely phrases which are inexplicable unless one sits oneself down with any gentleman from that part of the world, with a drink in hand.  It’s only then that one could get a literal translation of the art of ‘marroing angle’!

Back to my story after that tangential commercial break, being told that I was a total blank on anything to do with fishing, Clyde asked whether I might be interested to do what all self respecting Scotsmen do – Trout fishing!  Having heard through the grapevine that the PD was an avid angler (he was known to have actually said that getting a fish at the end of one’s line was much more pleasurable than having an o******) wild horses would not have held me back from grabbing the opportunity to play hooky from work once in a while and in the bargain get into Clyde’s good books.

Having established that I was hooked and may well be interested in the suggestion he had made, that evening I was invited to Clyde’s bungalow for a drink and was very kindly presented with a hand-me-down rod, a spinning reel, some line and a couple of swivels and spinners.   Having been educated on the basics of how one was supposed to use the tackle it I was told (ordered would to be the more appropriate word) that every evening, post end day muster, I should drop by at Clyde’s bungalow armed with the equipment.  And so began the evening ritual.

An almost three month rigerous training session of  converting ‘young Gurrinder’ into a well rounded planter by teaching me the ropes of how to cast a line, the way ‘this is how its done in Scotland!‘   The Surianalle PD bungalow has a huge cricket pitch sized lawn on which, armed with my ‘new’ rod, duly threaded and with a spinner at the end of the line, I was told to stand at one end while a coin was placed at the other end.  And so began my training.  Day after day, week after week, I was told that I should keep casting and aim to hit the coin.  While the new angler-in-the-making toiled away, Clyde and Winne (Mrs Lawrence) would be sitting in the verandah having their evening cuppa and scones with clotted cream & home made strawberry jam, every now and then making appreciative ‘oohs’ and ‘aahs’ whenever my spinner spoon actually managed to land on target and we all heard a rather satisfying ‘ping’ from that end of the lawn.

Three months later, it having been accepted that I was now a well trained

angler, regardless of the fact that I had never been near any water with his gifted tackle, I was asked whether, on the ensuing Sunday, I might want to accompany Clyde and Appu (K M Appaya, another one of the Assistants on Surianalle) to Gravel Banks.  Over the years and many fishing expeditions to Rajamallai estate, I can vouch to the fact that Gravel Banks is amongst the best fishing spots anywhere.  Appu, a couple of years senior to me, had obviously already been through the grind and was accepted by the boss as being an accomplished fisherman.

Come Sunday Appu and I hopped into Clyde’s Ambassador to be driven to Rajamallai at breakneck speed totally unmindful of potholes, bumps or anything else in front of the hapless car.  Clyde’s simplistic Scotsman logic being that if one sped (flew!) over impediments, one would feel them less and that the cars suspension was less prone to wear and tear.  The fact that his car was more often in the estate workshop for replacement of the dozens of rubber bushes (a typical feature of the Ambassador) rather than with Clyde, did not deter him or in any way help in changing his mind on how that poor vehicle begged to be driven.

Two hours later, duly shaken and stirred, we arrived at Gravel Banks, on the way having been tutored by Clyde to watch out for the leeches which in size, in and around Rajamallai estate, were reputed to be in close competition to the trout in the rivulet.  After we had assembled and threaded our respective rods, in good PD fashion Clyde told us that he was going to head upstream from the fishing hut and that Appu and I should head downstream.  The bosses straightforward logic being that with him being upstream from us he would be casting for fish which had not yet been spooked.  Dutifully the two of us headed off downstream from the fishing hut with monster sized leeches waving from side to side and reaching out at us from the grass and undergrowth on either side of the path.

As if the members of the leech infantry brigade were not enough, there were others which had probably been trained as free-fall parachutists, launching themselves at us from the thick overhanging branches from where they were capable of dropping down our backs.  The only way to avoid the blood suckers was to get off the path and instead walk along in the water unmindful of the rocks, every once in a while suddenly finding oneself stepping into a hole in the rivulet bed waist deep in freezing water.  Not that this deterred us from the main job at hand of casting out at regular intervals and every once in a while reeling in 12/13oz tiddlers which size is accepted as being the ‘Gravel Banks standard’.  So as to avoid disturbing each other and to ensure that neither of us ended up at the end of the others line with the others hook embedded in ones flanks, Appu walked along one bank of the rivulet while I waded through to the other side of the water.

About two hours into this, new for me, pleasurable exercise, I saw Appu’s rod curved at a rather acute angle.  Having by now established that this could only mean one of two things, that either he had snagged his hook on to some rock/bush/whatever (another very regular feature of the stream in Gravel Banks) and was yanking his line to somehow untangle and release the hook from whatever it was snagged in OR that he had a big one on the end of his line.  From where I was on exactly the opposite bank to him, I could see that Appu had got that fisherman’s look on his face when he knows he is on to a good thing.  As well he should have been, because following a bit of a struggle, he yanked out a goodish 1½ pounder which by Gravel Banks standards could only be described as a whopper.

Obviously jealous but also almost as excited as he was, I waded through the water to his side of the bank to look enviously at the largest trout I had seen thrashing around in his grip.  While I was still admiring the prize catch, Appu casually untangles the hook from out of the fellows mouth and then, horror of horrors, tosses the poor sod back into the stream.  It took me a minute to realize what he’d gone and done.  By which time the ‘catch’ was well on its way, more likely than not counting its blessings!

Took me some time to find my voice to start muttering to ask Appu the reason for this totally inexplicable behaviour.  Which is when I was given a lesson in ‘PD management’ which stayed with me and served me very well through my entire planting career in both South India as well as in Assam.  That for a peaceful next working week one never went back home with a bigger fish than the PD and never ever with a larger total catch than his and that, should one end up in that situation where nature has given you the larger bounty than the boss, as had happened on that occasion, just let it/them go!  A most valuable lesson which, well after I had left planting to branch out on my own, having no PD always expecting to go back home with a bigger catch than mine, has helped me sail through life.  With a smile on my face!

On that particular day, by one O’clock, as had been decided when we had headed out our up-stream and down-stream ways, we convened back at the fishing hut for our coffee and sandwiches.  The first obvious question thrown our way by Clyde was answered by us showing him the deliberate rather meagre harvest we had in our respective bags.  Not one word being uttered about the ‘one that had got away’.  In response, the PD with a ear to ear grin, opened his treasure trove to show off plenty more of the 12oz wonders than what Appu and I had collectively managed to get into our bags.