During my years in Assam, thanks to Ron Sircar’s ingenious nautical engineering skills which enabled us to spend our long weekends as gypsies on the water, those forays had, perforce, to be limited to the dry season when the mighty Brahmaputra had calmed down after the rains.  Till such time as we had the stodgy Mahindra jeeps, weekends during the extended monsoon season were spent in the club twiddling our thumbs, albeit with a glass in hand.  And then – magic!  In late 1985 Maruti-Suzuki (bless them) launched the Gypsy, a versatile little ‘go-anywhere’ beautiful 4 wheel drive vehicle which literally transformed our monsoon period lifestyles.

Not having been able to venture across the Alubari Ghat in the Mahindra jeeps which were wont to stall in the middle of the fast flowing waters rushing down from the hills of Arunachal to join up with the main river, the Gypsy enabled us to drive across those ‘streams’ and on to the series of ferries which spanned the main deep water channels.  Literally opening up a whole new world for us.  While I have already rambled on about our trip to Mayodya Pass this one veers off in a different direction.

Back in the day not having any fancy camping equipment to fall back on, we improvised 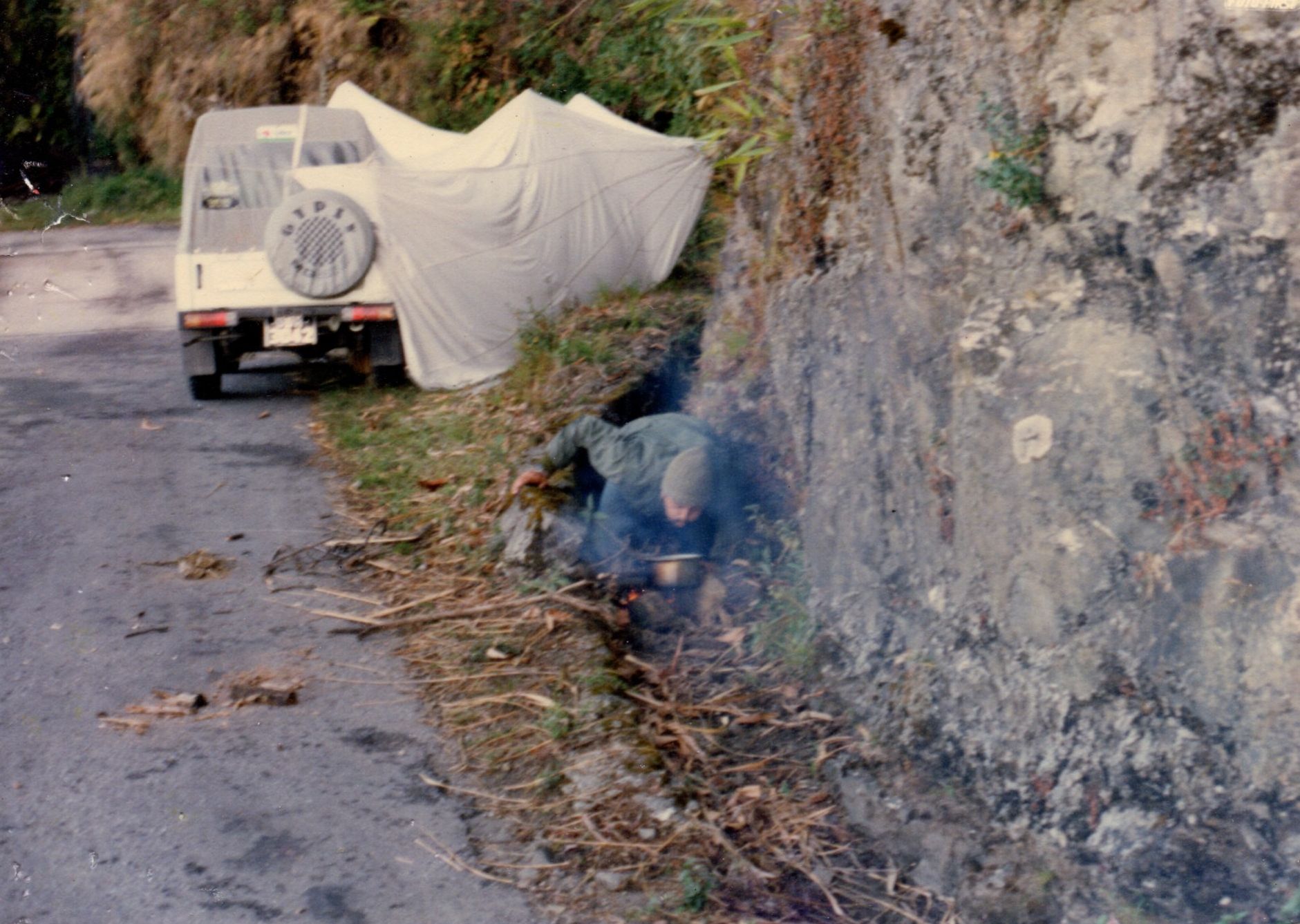 and how!  While my other friends, members of our ‘gypsy caravan’ had to make do with canvas bulking sheets borrowed from the factory sorting room, thanks to Sudeep Kumar, a friend and a colleague who’s Dad was in the army, I had the advantage of an army surplus parachute which was always put to some rather imaginative and innovative good use.

Driving off the last motorised deep water ferry, the only road on the other side being the link road to Tezu and beyond to Hayuliang, that road naturally became our standard route.  The further up one went on that route, with many side roads branching off to various villages, the already very sparse traffic (I use that word for lack of any other word to describe the trickle of vehicles on that road) would all but disappear so that we actually had the road all to ourselves, to the extent that over a 24 hour period even one vehicle plying in either direction would come as a big surprise.

With the road surface being the only flat and level area we’d find on those steep slopes, the centre of the road was the optimum camping site.  By early evening we’d all be keeping our eyes peeled for a water spring, regardless of the spring being just a trickle .  The moment we’d spot one, we’d park the four Gypsies in a cluster leaving just enough space on the side so that in the unlikely event of any vehicle heading down or uphill, our campsite would not be disturbed.  The first task, always, was to tap that sparse water source by arranging some large leaves or a split bamboo to make a spout under which we’d place a pan making sure that not a drop of the precious liquid was wasted.  The immediate task having been attended to, we’d get on with arranging ourselves into a sort gypsy camp configuration, using the parachute and the canvas bulking sheets as roofing material.  While the men would be busy taking care of the top, the ladies would get busy sweeping the road clean so that when we got into our respective sleeping bags, we would not find ourselves being poked in all sorts of awkward places with stones and other muck.  It was only after all the chores had been done that we’d settle down to knock back a couple before passing out for the night.

While this was the regular SOP, there was this one time when we were enroute to Hayuliang that we decided to give the road a miss and set up camp on a dry river bed close to a bridge spanning what we presumed must, at some point in time, have been a tributary of the Lohit, with the river likely having changed course leaving us with a supposedly lovely campsite.  While we were getting ourselves 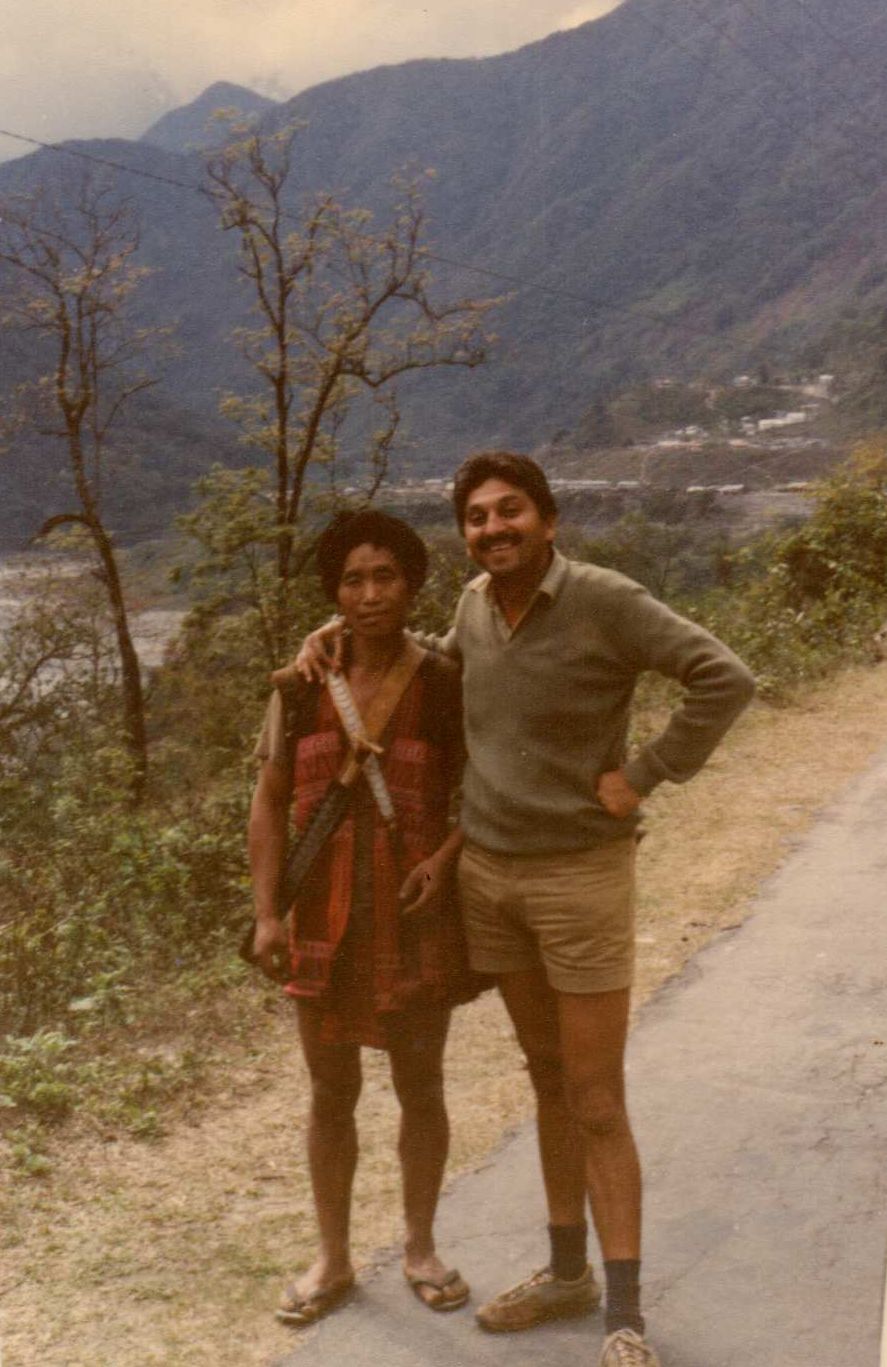 organised, a tribal Mishmi ambled across to where we were struggling to get our ‘tent’ up and stood watching us with a rather bemused smile before walking across to warn us that we should be careful since there was a tiger on the prowl in the area and that the fellow had been spotted quite regularly very close to the bridge.  Which warning was nonchalantly laughed off with Hardev sticking his chest out with an airy ‘after I’ve had some daru, I’ll take on any bloody tiger’

While we had no tiger dropping by to give us the once over, it was nature which caught us by the scruff of our necks and shook us up good and proper, reminding us as to who exactly was the boss and calling the shots!

Likely following a cloudburst (we could clearly hear the thunder and were treated to a spectacular pyrotechnic show) somewhere up in the hills, that night the Lohit decided to once again change course to meander down the disused riverbed which it had probably abandoned years ago.  Late in the night we were all rudely woken up from our ‘dead to the world’ slumber with water flowing under our canvas groundsheet and slowly creeping up into our sleeping bags.  What followed was a rather hasty dismantling of our campsite and getting our Gypsies up to higher ground from where we watched what had been the dry river bed filling up with the surging fast flowing water.  Drenched as we were, we did what best we could with our soggy canvas sheets and parachute to get out from the rain and under some cover for the rest of that night.  By the morning it had all been taken in our stride as being par for the course!

Foolhardy we all most certainly were, but what fun!

Living life to the fullest even when drenched to the bone!!