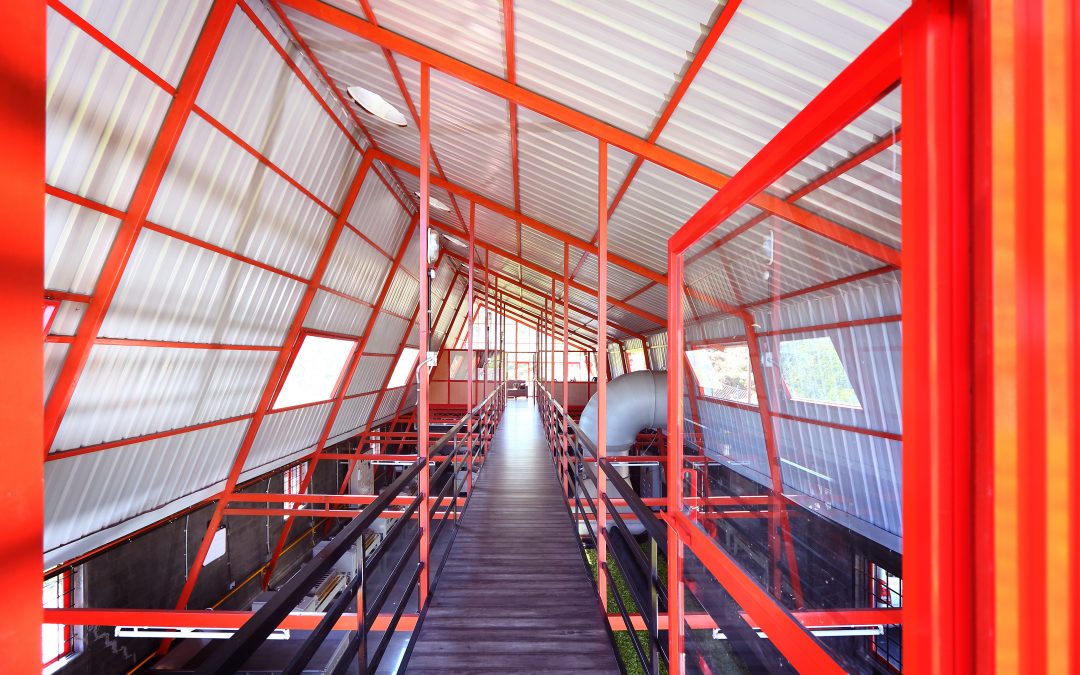 When British occupiers first visited the remote Nilgiri Hills of southern India in the 1820s, they declared the region a wasteland. There was nothing here but mountains and forests, plus a healthy tiger population. But it was cooler up at 1,800 metres than down on the plain, and the steep hillsides (Nilgiri means “blue hills” thanks to a flower that blossoms here every 12 years) were a perfect place to plant tea. The Brits were desperate for a cheaper, more cooperative source than China so they took over the hills, chopped down the forests and planted tea where the trees had stood.

Almost two centuries later, the Nilgiris’ economy still thrives on tea, and despite the 19th-century deforestation, the region feels underdeveloped and unspoiled. “This is the best of India,” says Indi Khanna, a 45-year veteran of the tea industry and the driving force behind Tea Studio, a boutique tea factory near the village of T.Manihatty. “When I’m here,” he says, looking out over the lush valley where the factory is situated, “I feel like I’ve died and gone to heaven.” Khanna, who drives a vintage-styled Royal Enfield motorcycle and has a knack for storytelling, says he is realizing his life’s goal: to craft teas that stand out as unique in India.INDIA,FOOD,THE FOOD ISSUEBy Andrew Elkin
Photos by Sara HyltonOCTOBER 25, 2019

Tea is re-emerging as a premium product, driven by whole-leaf teas produced across a variety of terroirs and processes, with flavour profiles ranging from floral and refreshing to earthy and complex. The boom has come to India, too, where nearly one million tonnes of tea are consumed each year. “Here, premium tea is a very fine little niche that we’re talking about,” says Khanna. “But in India the numbers are so large that a little niche can actually be quite significant.” If Indian tea is going to rise again, the Nilgiris is where it can happen.

The Nilgiri Hills are something of a marvel within India, a beautiful patchwork of sloping forest and tea garden intersected by narrow, twisting roads. Far from big cities, the region has remained sparsely populated, and most of the plantations belong to small-holding farmers who use no pesticides. Khanna deems the tea leaf they produce “naturally organic” – it’s not certified, because practices here predate certification, and farmers cannot afford the expense required to attain it.

The Nilgiris had long been known for producing aromatic teas low in astringency (due to the altitude at which they grow), but when Crush, Tear, Curl processing machines came to the region in the 1970s, “quality became a byword,” says Khanna. “People realized that anything they put in came out the other end looking black.” Local pride suffered as Nilgiri tea became synonymous with bulk low-quality stuff destined for generic blends and use as an ingredient, like in the chai sold at stands across the country. But Tea Studio is reviving growers’ sense of purpose, and offering pluckers 150 rupees (CAD$3) per kilogram – almost 10 times what other buyers pay – if they bring in the right kind of leaf.

A group of a dozen tea producers and retailers from Latin America have come to Tea Studio on a tour of India to see where and how their favourite teas are made. After introductions and a tour of the red-roofed modern-industrial factory building, it is time to taste the Studio’s teas. Kevin Gascoyne, the India expert from Montreal tea merchant and Tea Studio founding partner Camellia Sinensis, gets it underway. When tasting, a short, sharp slurp helps to oxygenate the tea and highlight aromas. After swallowing (or spitting), loudly smacking the tongue off the palate can help to bring out any lasting astringency and bitterness. Ssslup! Tsak, tsak, tsak. A line forms behind Gascoyne. There are 12 teas in total, including the woody, nutty Kukicha; the malty, peppery Nilgiri Tress; and the Long Jing-style young mountain tea made with tea buds, showing the sweet, citrusy quality of Nilgiri teas. By the time Gascoyne has tasted the last tea, the room is all a-slurp.

Sunrise over the 2000-metre peaks of the Nilgiri Hills, part of the Western Ghats mountain chain.

“The teas are tasting very nice,” Gascoyne says with a grin and two upturned thumbs. “We have been working hard to get the teas to a level where they can be the new standard in the region.” His role is to help fine-tune the Studio’s tea-making, and to answer visitors’ questions: Gascoyne is a walking tea encyclopedia, a revered taster and a top buyer in his specialty region of Darjeeling, 2,500 kilometres to the northeast. In a given year, he will taste about 1,000 different teas, and he has been around India 20-odd times scouting new growers and producers. When he travels, half his luggage is clothing; the rest is a tea set and rare and new-release teas that fuel marathon evening tastings. Gascoyne’s and his company’s reputations are big draws in Tea Studio’s education program that attracted four tour groups and several dozen visitors to the region in 2019.

Camellia Sinensis (the Latin name for the China tea plant) is the link to the international market. Operator of three tea houses in Montreal and in Quebec City, Tea Studio’s Canadian partner is best known for its wholesale catalogue, which has a global following. Independent teashops and online retailers – in India and around the world – are generating and supplying demand for leaf teas through increasingly easy access to one-off products; each sought-after sip comes paired with an alluring, detailed story about its producer. At Tea Studio, that story is one of innovation and renewal.

Kevin Gascoyne tastes first flush teas at Thurbo Estate, in Darjeeling. Each tea is made from leaves plucked in a different part of the tea garden.

Tea Studio visitors and employees work together to separate the wilted, rolled leaf to be made into green tea.

Muskan Khanna (she is Indi’s daughter) has shown a genetic-level aptitude for tea since transitioning from advertising to Tea Studio’s operations manager. Soon after the Studio’s opening in 2018, she invented a new tea from stems discarded in the sorting process. The woody, crisply tannic Green Nilgiri Bamboo won her 2019 Innovator of the Year from the Indian Women’s Business and Conference Awards, and a patent in her name is in progress. Another innovation in this region is the Studio’s all-female factory team, led by a mother of two from a nearby village.

The team has put considerable energy into retraining local pluckers, who are used to harvesting with a sickle or a pair of shears instead of by hand. “We only want the bud and the first two leaves,” Muskan explains. “That’s where all the aromatic compounds are concentrated.” Further down the stalk, the tannin content is higher, making for a bitter, one-dimensional cup. The Nilgiris are far enough south to produce tea year-round, since plants never go dormant. Tea is a bit like wine in that two producers making the same style in the same region will create distinctly different products, further characterized by seasonal variables. Nilgiri was until recently the world’s highest elevation tea-growing region. At such high altitude, cool nights help give the tea a sweet, fruity character unique to the region.

A view of Emerald Lake, a resort area near the Nilgiri town of Ooty.

Tea Studio’s potential to make long-term change lies in their ability to see challenges as opportunities in a moment when tea is at a crossroads: global bulk production is rising and prices are dropping. But after 5,000 years of cultivation and refinement, the drink’s appeal remains its versatility. Tea can warm your hands and your belly, it can slake your thirst, it can revive, soothe or relax. It is packed with antioxidants, and a well-brewed cup can bring focus and calm alertness. The drink’s caffeine quotient (typically about half that of brewed coffee, by volume) is balanced by theanine, an amino acid that boosts production of neurotransmitters that promote alpha brainwave activity – the kind that goes hand in hand with relaxation. As tea freaks will tell you, premium leaf teas do all this and throw in a one-of-a-kind flavour experience. It’s no wonder that tea invites the drinker to stare down into the bottom of her cup.

Downstairs at Tea Studio, a local grower has arrived by tuk-tuk with the day’s harvest in nylon mesh bags. Gascoyne and head tea-maker Vaideghi Kannan greet him and sort through the leaves, making two piles from one. Eventually, the grower walks back to his vehicle with roughly half his harvest and a bemused smile. What he has left at the Studio will be wilted overnight and turned into green tea. “It is better than what he brought yesterday,” Gascoyne says, tearing at a fresh leaf and tasting it. “There is still work to do, but that’s progress.”
TRAVEL ESSENTIALS

Tea Studio is open to tea tourists and other visitors by appointment. To arrange a tour or a tea-making experience, contact the Studio. To get a taste of the Nilgiri Hills without leaving home, try one of the five Tea Studio products available from Camellia Sinensis.